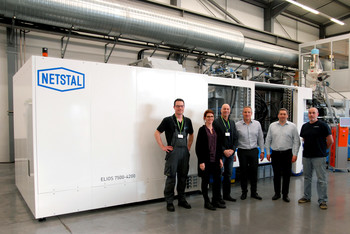 (Näfels/Castelnaudary, February 23, 2017) The French mold manufacturer Plastisud has just received an ELIOS 7500 to supplement its technical center.  Plastisud employs a staff of about 200 globally and is one of the world's leading manufacturers of high-precision injection molds for thin-wall packaging, beverage closures and medical components.  Plastisud will use the ELIOS 7500 for intensive functionality and performance tests.  Netstal and Plastisud have been working together closely for years. Plastisud's ultra-modern technical center only contains injection molding machines from Netstal.

Mold commissioning with the ELIOS 7500

The new ELIOS is set up for the high performance and utmost precision required for thin-wall packaging.  That's why the French mold manufacturer relies on the new Netstal series for performance tests of molds in the upper clamping force range. The new ELIOS 7500 was put into operation at Plastisud in early February.  "In our technical center, we commission molds for our customers," said Plastisud CEO Laurent Buzzo. "We will need the ELIOS 7500 for future projects in a high clamping force range," Buzzo added. In particular, that means large molds for the production of lids, containers, cartridges, large beverage closures and petri dishes with a diameter of 90 mm.  "We selected the new ELIOS because it perfectly meets our demands with regard to flexibility and adaptability. We have to test molds with many cavities and large stack molds on the ELIOS, but can also use it for smaller molds if the smaller machines are not available," Buzzo explained.  "In this regard, Netstal and its ELIOS set themselves apart because the new machine can be adapted effortlessly for various projects. With its lightning quick injection speed as well as rapid cycle times of about 2.5 seconds, it also offers an impressive performance package," said Jean-Luc Grange, Application Technology Manager at Netstal France.

Close cooperation between Plastisud and Netstal

Plastisud was founded in 1964 and has established itself as one of the world's leading manufacturers of high-precision molds for thin-wall packaging, beverage closures and medical components. The family-owned company has a staff of about 200 employees, most of which work at the headquarters in Castelnaudary where all products are developed and manufactured.  The company relies on its own ability to innovate and outsources almost no aspect of its work.  In order to further stand out from its competitors, Plastisud began with the development of its own hot runner technology in 1969.  The French mold maker Plastisud and the Swiss injection molding machine manufacturer Netstal have been cooperating closely for many years.  The ultra-modern 1,600 m2 test laboratory in Castelnaudary is exclusively equipped with injection molding machines from Netstal. Including the ELIOS 7500, Plastisud will cover the clamping force range from 900kN to 7,500kN with a total of 11 machines.

Injection-compression molding in a stack mold

Plastisud and Netstal are also working together closely in the field of application technology. In 2015, the two companies introduced the new ICM process  (injection-compression molding in a stack mold, patented by Plastisud ), which allows the production of thin-wall packaging with 20% less material and a clamping force that is reduced by 40%.  "In order to establish the ICM technology on the market, we held the first ICM Days with 120 packaging experts at Plastisud in Castelnaudary last spring," said Jean-Luc Grange. At K 2016 in Düsseldorf, Netstal and Plastisud once again presented the ICM technology to a global audience of experts. On an ELION 2800-2000, which had been modified for the injection-compression molding process, margarine containers with IML decoration were produced in a 4+4 stack mold from Plastisud. 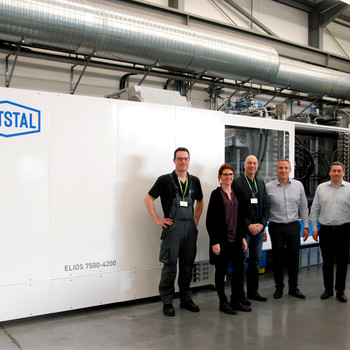 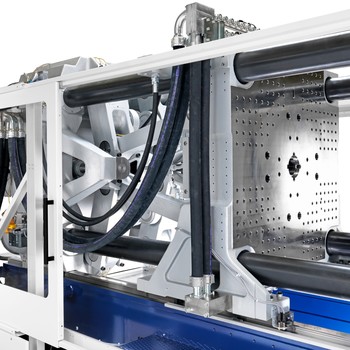