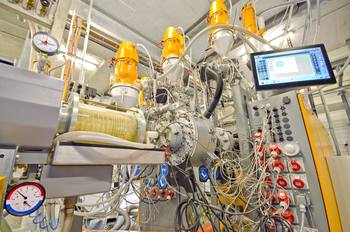 (Munich, May 10, 2017) Enetec Plastics GmbH (headquartered in Kleve, Germany) has invested its third complete extrusion line for manufacturing 5-layered PE-RT pipes for heat exchanger systems. The company, which was founded just in 2014, based its decision in favor of the solutions from Munich on advantages in process technology, and success proves it right. Two identical complete systems have already been producing premium quality heating pipe systems with a diameter between 8 and 32 mm for several years and with great success. The recently ordered system will be commissioned by the end of this year.

"It was especially important to me to have a partner offering an integrative, customized concept—so to speak, a turnkey system enabling us to manufacture more than just me-too products," Enetec's managing director, Michael Frenzel, explains his decision in favor of KraussMaffei Berstorff. The mechanical engineering company was able to fulfill the requirements in such a way that the pipe manufacturer ordered its second line just nine months after the initial installation—and now has ordered its third.

The highlight of the systems is the KM 5L-RKW 01-40 5-layer pipe head, which is not only a novelty for KraussMaffei Berstorff but also unique within the industry. "We have succeeded in designing a pipe head that combines multiple spiral distributor principles. Using the pipe head, manufacturing multi-layered pipes with perfect layer thickness distribution becomes possible at high line speeds," boasts Andreas Kessler, General Sales Manager of KraussMaffei Berstorff at its Munich location. The inner layer is led over an axial spiral, while the layers of bonding material EVOH are distributed over three spiral distributors and a conical spiral has been selected for the outer layer. The main advantage of this design is the exact distribution of the layers, which allows for a significant reduction of the material costs in pipe production.

The pipe head is fed by six single-screw extruders, each of which is equipped with its own gravimetric material metering so that different layer thicknesses can be configured perfectly. In detail, these are the KME 45-36 B/R main extruder for the PE-RT inner layer and the KME 30-30 B coextruder for the PE-RT outer layer. Two further coextruders of the KME 30-25 D/C type each plasticize the raw material for the layers of bonding material, into which the EVOH oxygen barrier layer is embedded. For these, a KME 30-25 is installed as a piggyback on the main extruder. Finally, the sixth extruder, a KME 20-25 D/C, also installed as a piggyback solution on top of one of the coextruders, takes over appliance of the strips.

The parent company has its headquarters in Kleve (Germany) and is part of the Italian E-Group. For about thirty years, Enetec has been highly successful as an OEM supplier of heating and cooling systems all over the world.

At a maximum annual production capacity of 40,000 kilometers of pipe and a worldwide export quota of 80 percent, the young company became a household name in the industry in almost no time.

As a system provider, KraussMaffei Berstorff is continuously striving for further optimization of its successful system concepts with regard to an increase in cost-efficiency. The company is thus meeting the growing demands of processors for maximum system availability, optimal product quality and highest performance levels. With OEE Plus, KraussMaffei Berstorff offers premium quality solutions to its customers in order to increase overall equipment efficiency (OEE). 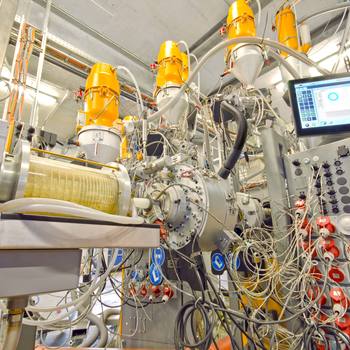 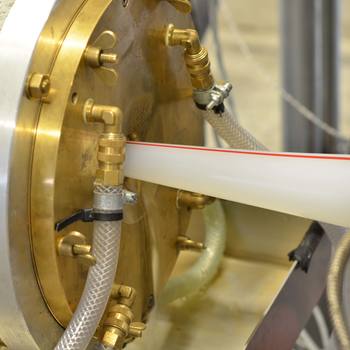