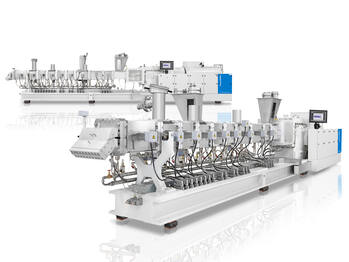 (Hannover / Düsseldorf 3 July 2019) KraussMaffei's extrusion division launched its high-performance ZE BluePower series certainly not in a strictly chronological order, but following a consistent approach. For the third time in a row, these twin-screw extruders will be among the highlights showcased at K 2019 in Düsseldorf from October 16 to 23. While the medium-size models were introduced six years ago, followed by the laboratory machine three years later, the time has come for the launch of the large-size version. The four big compounding extruder variants for throughput rates of 2,500 kg/h and more will be available immediately after the end of the exhibition. As the ZE BluePower series now comprises tailored extruders for any type of application and offers at the same time enormous process-engineering benefits, it will replace all previous twin-screw extruder series.

"Since its market launch in 2013, the ZE BluePower has gained a strong foothold in the market for a wide range of compounding tasks as well as for reaction and degassing applications. This series stands out for unparalleled output rates, short set-up times and maximum cost effectiveness," says Matthias Sieverding, President of the Extrusion Technology Segment at KraussMaffei. "The new series is designed for large national and international compounding companies with high production capacities where maximum reliability in 24/7 operation is a must," continues Sieverding.

The combination of large free volume and high specific torque enables universal application of the ZE BluePower for compounding engineering plastics and even highly filled formulations. Thanks to the 1.65 OD/ID diameter ratio, the free volume is increased by 27 % as compared to the previous ZE UT extruder series. In addition, the ZE BluePower features a 36 % higher torque density of 16 Nm/cm3. This high-performance twin-screw extruder is tailored for any application – from the production of compounds, expanded sheets, biaxially oriented film and sheets up to the processing of recycled material.

From a process-engineering point of view, the four large extruder variants 98, 122, 142 and 166 are absolutely identical with the smaller sister models. This ensures consistent scale up, which is of particular importance for the development and processing of new formulations. The larger extruders also offer the same screw and barrel modularity. A wide range of 4D and 6D barrel sections and various side feeder and degassing units are available for the extruder configuration. Exchangeable oval liners provide a cost-effective alternative for extremely wear-intensive processes. However, minor design modifications were implemented by KraussMaffei to allow for the size of the new extruders. The housing elements are connected by means of screw unions instead of clamping flanges, cartridge heaters are replaced by ceramic heaters and the shape was slightly changed.

Extensive information on the new series will be available at the KraussMaffei booth B 27 in hall 15 during the K 19 exhibition. "The results obtained in first trials using a high-filled polypropylene formulation with 50 % of an only 1 μm fine talc were perfectly in line with our expectations and furnished ample proof of the outstanding performance of this innovative and trend-setting machine concept," says Matthias Sieverding. 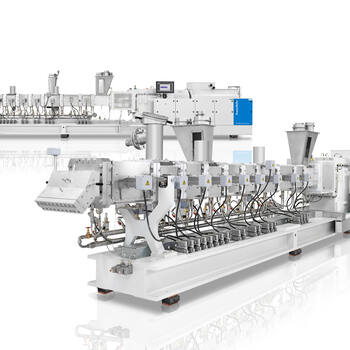 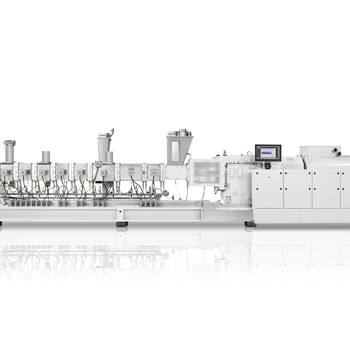